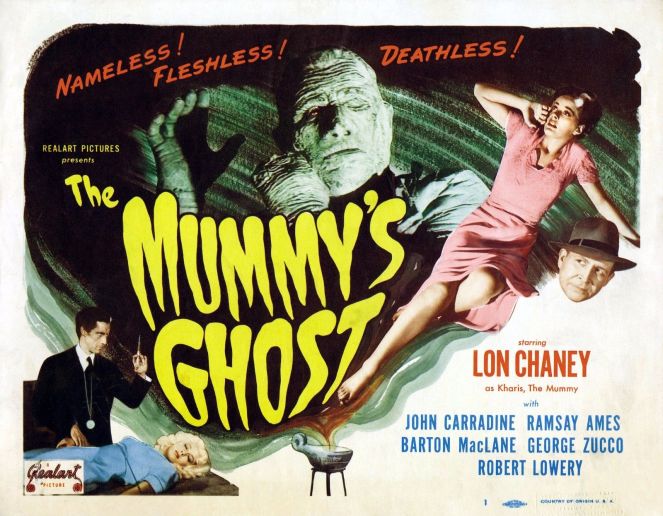 The following review is one of several that I composed for the ClassicFlix site under the column title “Where’s That Been?”  Most of those columns made the transition to CF’s new site but some of them stayed behind for reason or another…and since my writer’s ego is just big enough to where I don’t like having what I’ve penned shielded from the large number of folks who surf the Internets I have reprinted it here.  Enjoy!  With his star-making role in Frankenstein (1931), actor Boris Karloff would soon become one of Universal Pictures’ most bankable thespians at the box office, cementing his new reputation as the heir to horror icon Lon Chaney with memorable performances in The Old Dark House (1932) and The Mummy (1932). In this latter film, Karloff plays an Egyptian mummy (Imhotep) resurrected by an incantation on an ancient scroll by a careless archaeologist. Up and about, Imhotep disguises himself as a scholar named Ardeth Bay—who seeks to revive lost love Princess Ankh-es-en-Amon (Zita Johann), believing that she has been reincarnated as Helen Grosvenor (also Johann).  The Mummy did quite well for Universal, but unlike those movies that followed in the wake of their Dracula (1936’s Dracula’s Daughter) and Frankenstein (1935’s Bride of Frankenstein) franchises, it took the studio a bit more time to “reincarnate” the Mummy series. (The decision to make another Mummy film came about from the “New Universal’s” success with Son of Frankenstein [1939] and The Invisible Man Returns [1940].) But rather than duplicate the understated horror of the 1932 original, Universal decided to go the B-picture route, catering to thrill seekers more attuned to non-stop action with a little bit of comedy added for spice. (An early example of the re-boot, if you will.)

The Mummy’s Hand (1940) was the eventual result. It was the first in what would be known as Universal’s “Kharis” series; Kharis (Tom Tyler) being a revived mummy with murder and mayhem on his mind as he searches for his reincarnated love, the Princess Ananka. (Hand generously availed itself of stock footage from the 1932 Karloff film.) Archaeologists Dick Foran (as Steve Banning) and Wallace Ford (as Babe Jenson) join two other Americans (Cecil Kellaway, Peggy Moran) in a dig to locate Ananka’s lost tomb, while villainous George Zucco (as religious sect member Andoheb) pulls out all the stops to discourage the curious Yanks by ordering Kharis to do what he does best.  The Mummy’ Tomb followed Hand two years later; Foran, Zucco, and Ford (though his character’s name has been changed to Hanson) reprised their roles from the original film, only the characters played by Dick and Wally end up drawing their rations thanks to a vengeful Kharis (now played by Lon Chaney, Jr.). (Zucco’s Andoheb also expires in this movie, even though he was thought to have kicked the bucket in Hand.) The setting of the mummy homicides switches from Egypt to small-town Mapleton, MA thirty years after the events in Hand, with Steve Banning’s son John (John Hubbard) forced to match wits with both Kharis and Mehemet Bey (Turhan Bey)—a disciple of Andoheb’s who has taken a shine to John’s fiancé Isobel (Elyse Knox). At Tomb’s conclusion, Kharis appears to perish in the flames from a burning house…or does he?

The answer to that is no. No, he does not. We learn this in The Mummy’s Ghost (1944), which brings Lon, Jr. back as Kharis, Zucco as Andoheb (this guy has more lives than a cat!), and Frank Reicher (the captain from King Kong) as Professor Norman (first introduced in The Mummy’s Tomb). Andoheb, the indestructible High Priest of Arkam, summons loyal disciple Yousef Bey (John Carradine) for the express purpose of once again letting ol‘ Kharis romp and stomp at large. The method by which Kharis is revived (utilized in both Hand and Tomb) is brewing the fluid from nine tana leaves (tana is purportedly extinct yet there always seems to be plenty on hand when there’s mummying to be done) during a full moon.  At the same time Bey is receiving his instructions from Andoheb, Professor Norman relates the same legend of Kharis to a college history class with Tom Hervey (Robert Lowery) and his girlfriend Amina Mansori (Ramsay Ames) in attendance. (This allows the filmmakers to use footage from previous Mummy fests to pad out the runtime.) Later that night, Norman is deciphering hieroglyphics when he stumbles onto the secret meaning of the tana leaves. His discovery is short-lived, however; he winds up strangled by Kharis, who’ll dispatch a few more individuals to the Happy Hunting Ground while attempting to woo his love, who’s been reincarnated as Amina.  Kharis the Mummy was not Lon Chaney, Jr.’s favorite horror film role. The Mummy costume and make-up were both cumbersome and uncomfortable; the actor told a UP reporter visiting the set: “I sweat and I can’t wipe it away. I itch and I can’t scratch.” The misery that went along with playing the Mummy might go a long way toward explaining why Lon’s performances as the wrapped menace were uninspired. But of the three Mummy films in which he appeared, Ghost is the best (though not without its flaws); Lon adds a bit of nuance (he’s quite effective in a sequence at a museum where, with a trembling hand, he caresses the cheek of his love Ananka) to a part that really doesn’t require anything more than shambling around in old, dirty bandages. (I’ve never understood how the Mummy claimed so many victims. You don’t have to be Usain Bolt to outrun the guy.)

Ghost also benefits from the presence of John Carradine, who, despite a willingness to take any acting part (he used the cash to fund his own touring classical theatre company) always brings a much-needed measure of class and respectability to each and every movie job. His best moment is his reaction to Andoheb’s news that Kharis is still alive: “Kharis…still lives?” His “get-out-of-town” attitude provides a little bit of unintentional humor in Ghost, but compared to what follows later in the plot, it’s minor at best.  Robert Lowery plays the world’s oldest college student in Tom Hervey. Most of the movies that I’ve seen Bob in are B-pictures and serials (The Mystery of the Riverboat, The Monster and the Ape) but I have to confess the cliffhangers provided the actor with his best movie showcase: in Batman and Robin (1949), he’s not terribly effective as The Caped Crusader, but his Bruce Wayne is spot-on—a callous, bored playboy that Lowery plays to perfection. As Tom’s main squeeze Amina Mansori, Ramsay Ames also did her fair share of serials (The Black Widow, G-Men Never Forget) as well as programmers (Below the Deadline); her Amina curiously develops streaks of white in her hair each time she comes into contact with Kharis, giving her a slight Bride of Frankenstein look. 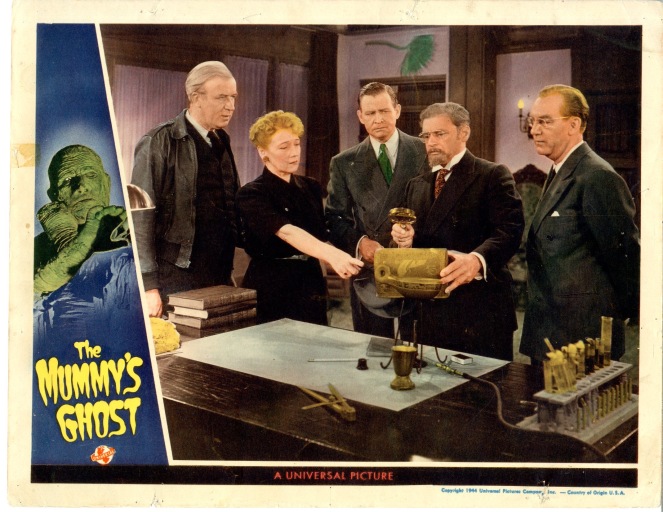 Other character favorites in the Ghost cast include Barton MacLane, Harry Shannon, and Emmett Vogan (reprising his role from Tomb as Mapleton’s coroner); the script by Griffin Jay, Henry Sucher, and Brenda Weisberg has more holes than a golf course, but the direction by journeyman Reginald Le Borg is eerily effective. Ghost was the inaugural introduction to the horror genre for Le Borg, who later helmed several entries in Universal’s Inner Sanctum franchise in addition to working with such terror icons as Boris Karloff and Bela Lugosi.  It’s a shame they didn’t let Reggie handle the fourth and final Kharis film, The Mummy’s Curse (1944); this movie turns the Mummy loose in Bayou Country despite having disappeared with Amina in the waters of a Massachusetts swamp in the previous film (Le Borg was inspired by Lost Horizon to come up with Ghost’s somewhat downbeat finale). With Curse, Universal called it quits as far as The Mummy was concerned, though they made one final film (before Hammer revived the concept with 1959’s The Mummy) pitting The Wrapped One against Bud & Lou in Abbott & Costello Meet the Mummy (1955). 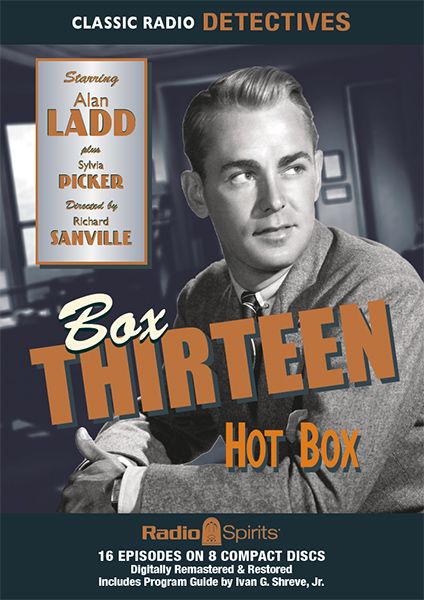 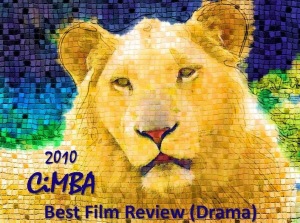 Opinions on Classic Hollywood and "Not so classic' film plus related subjects by Canadian film guy TERRY SHERWOOD. (Every film mentioned on this site has been viewed)