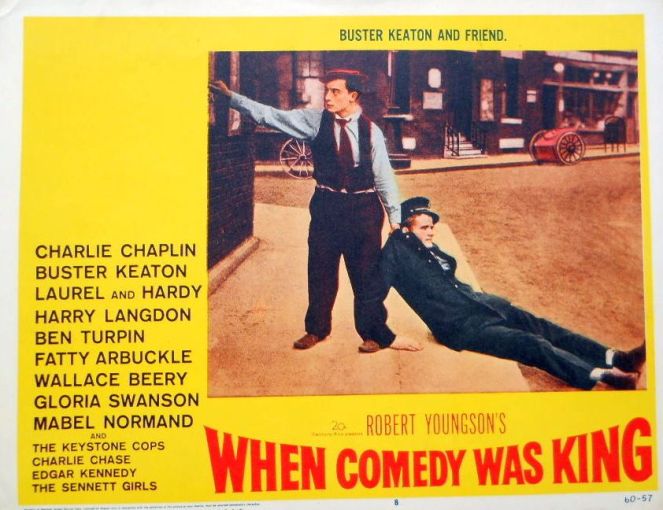 Filmmaker Robert Youngson considered 1960’s When Comedy Was King his personal favorite of all his feature-length film compilations showcasing classic footage from silent movies (with a heavy concentration on those immortal mirthmakers from that era).  Historian Richard M. Roberts isn’t bashful about saying it’s Youngson’s best work, either, and his commentary for the recent Sprocket Vault release of WCWK (restored from “full-frame 35mm fine grains”) is a valentine to the man who can accept the responsibility for stoking the interest of future movie collectors and buffs in “The Golden Age of Comedy” (the title of Youngson’s 1957 feature).  As you may have surmised from frequent visits to this ‘umble scrap of the blogosphere, I owe Mr. Youngson a debt of gratitude as well; his 1967 compilation The Further Perils of Laurel and Hardy*, as well as exposure to the Columbia two-reel comedies that ran like tap water on WCHS-TV (in Charleston, WV) in my youth, were the stepping stones to the movie mania that has thankfully dominated my very existence to this day.

When Comedy Was King highlights some truly classic comedy from its most accomplished practitioners.  Charlie Chapin is well-represented with clips from several of his Keystone comedies (The Masquerader [1914], His Trysting Place [1914], etc.) and a generous portion of Buster Keaton’s Cops (1922) is also featured.  (As Richard explains in WCWK’s commentary track, Cops was in the public domain—allowing Youngson to use the footage without having to make any deals with Satan incarnate, Raymond Rohauer.**  I’m not joking about this last part.  Roberts spits out Rohauer’s name in the same disdainful manner with which people say “Nazi Germany.”  If you’d like to learn more about the man who’s currently watching Dippy-Doo-Dads comedies for the rest of eternity in Movie Hell, Google “Raymond Rohauer.”)  Harold Lloyd is absent from WCWK because Lloyd still owned most of his oeuvre; he’s also MIA in The Golden Age of Comedy (1957).

You’ll also find footage from funsters such as Roscoe ‘Fatty’ Arbuckle (with Mabel Normand and Al St. John in the classic Fatty and Mabel Adrift [1916]), ‘Snub’ Pollard (It’s a Gift [1923]), Ben Turpin (Yukon Jake [1924]), and Billy Bevan (several comedies including 1925’s Super Duper Dyne Lizzies and Wandering Willies [1926]).  The opening credits of WCWK are run over Charley Chase’s last silent short, Movie Night (1929), and the film concludes with a truncated version of one of the most hilarious of Stan Laurel & Oliver Hardy shorts, Big Business (1929—the perfect example of what historian John McCabe once called The Boys’ “reciprocal destruction”).  (Richard observes of Business that there’s more truth in those two reels “than in Intolerance or any one reel of any Carl Dreyer film.”)  Highlights from one of the most gut-bustingly funny two-reel comedies I’ve ever watched, A Pair of Tights (1928—with the female comedy team of Anita Garvin and Marion “Peanuts” Byron), is also included in WCWK, as is a portion of Teddy at the Throttle (1917)***, a vintage Mack Sennett treat featuring Bobby Vernon, Gloria Swanson, Wallace Beery, and “Teddy the Dog.”

I’ve reviewed two Youngson collaborations previously at TDOY: Days of Thrills and Laughter (1961) and 4 Clowns (1970).  In my piece on Laughter, I noted that Richard and I had an e-mail conversation on the importance of these features that many consider “old-hat” and “corny” today.  RMR couldn’t emphasize enough that in instance after instance, Youngson’s movies often contained the only extant footage of classic silent film comedies; an excellent example in When Comedy Was King is Harry Langdon’s The First 100 Years (1924).  The footage of that short that you see in WCWK: that’s all that survives, brother.  (There was an attempt to track down this two-reel comedy at the time the All-Day Entertainment project Lost and Found: The Harry Langdon Collection was being put together…and every possible lead turned up bupkis.)  Footage from another comedy featured in WCWK, Bevan’s Wall Street Blues (1924), was reconstructed by British collector Dave Glass using the footage from this movie and other sources, and a complete version of the comedy premiered at Slapstickcon in 2013.  (“You can now find it on YouTube,” deadpans RMR.)

But back to that “old-hat” and “corny” thing.  It’s important to note that even when the Youngson movies got maudlin (the chief culprit is that “Bring Back the Laughter” song from 1963’s 30 Years of Fun) they were always made with the utmost reverence for the comedians and personalities featured in those movies.  Robert’s features laid the groundwork for a renewed interest in silent movie comedy, and that’s why listening to Richard’s commentary on this DVD release is such a delight (I watched the movie sans commentary at first, and then ran it a second time).  I enjoy hearing how Youngson’s releases inspired RMR to not only collect these films but also to pursue a career writing about these classics; Roberts leaves no detail unturned as he meticulously documents Youngson’s career (covering his various productions and the people who worked with him) while making pointed and pertinent remarks on how these classics were previously presented pre-Youngson.  (RMR can add “impressionist” to his thespic resume when he channels Pete Smith—“Oh, my…”)  By the time Roberts reminisces about his budding collector days by being seduced by Blackhawk Films, I was saying out loud: “That could have been me…if I had been able to buy a home movie projector.”  (I remember salivating over each Blackhawk catalog—I started getting them because I purchased a few “Radio Reruns” cassettes from the company—and reading the descriptions on the Laurel & Hardy and Charley Chase shorts for sale with something I can only describe as sheer rapture.) 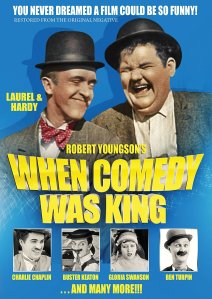 Richard Roberts’ lifelong acquisition of silent comedies is an added benefit due to the bonus material on the When Comedy Was King DVD: there are three comedies from his collection included, notably the Ton of Fun romp Heavy Love (1926).  I got a real kick out of Lige Conley’s Fast and Furious (1924), and enjoyed Hughie Mack and Dot Farley in An Elephant on His Hands (1920) …even if it did leave me a little bewildered.  (As I suspected, Richard’s print of Heavy Love is a vast improvement over the one featured on the Alpha Video DVD.)  If you are a silent comedy maven like I am, you need to add this edition of WCWK to your DVD library; and if you need to toss out your old Televista copy (gleaned from an inferior 16mm print) I will not judge you.  To the good people at The Sprocket Vault: more like this, please!

*The Further Perils of Laurel and Hardy was my introduction to one of The Boys’ oddest two-reel comedies, Early to Bed (1928).  When I finally got the opportunity to see Bed in its entirety many, many years later…I noticed it didn’t play as well as when I first saw it in Further Perils.  So I was pleased to learn while listening to RMR’s commentary that it wasn’t just me; he believes Youngson’s editing of the short for his feature improved the material substantially.

**Blame Raymond Rohauer for the reason why a DVD release of 4 Clowns may never come to fruition.  The movie concludes with a thirty-five-minute version of Buster Keaton’s Seven Chances (1925), and was licensed for use in Clowns for only a brief period.  (Rohauer was a first-rate swine…even if we grudgingly owe him for preserving the cinematic legacy of The Great Stone Face.)

***I can’t remember the name of the ABC-TV special in the 1970s (it was a salute to the movies—perhaps someone out there in YesteryearLand can help me out) but it’s on that telecast that I first saw (an excerpt, I’m sure) Teddy at the Throttle.  It was probably the oldest movie (outside of the Chaplin Mutuals) that I had viewed at that time.

One thought on ““You never dreamed a film could be so funny!””