Last year when I was convalescing from my various medical maladies I was fortunate to have as a houseguest me sainted Irish mother, who’s a great deal of fun to be around while you’re watching a movie (she has sarcasm, and she’s not afraid to use it) and whose cooking is a hell of a lot better than mine, let me tell you.  As she was preparing to return to her regular station at the Double K Ranch (the pet name for my sister Kat’s place) I extended an open invitation for her to return to Castle Yesteryear anytime the need arises, so I was surprised when she called me yesterday afternoon:

MOM: Can your father and I come over tomorrow and do some laundry at your place?
ME: Of course you can!  I’d be happy to have you!
MOM: Fine…but I want you to straighten up before we get there…
ME: Oh…in that case, I won’t be happy to have you.  (Pause) No, I’m kidding, of course…come on over…
MOM: I know you’re kidding…but I’m serious about straightening up…
ME: Then I’m definitely not kidding…

So that, in a nutshell, is the reason why you’re seeing a post on the blog so early this morning—I wanted to get something up before they arrived and I have to play gracious host (“More scallop puffs, Mater?”).  This might interfere a bit with this evening’s plans, though: as you know, TCM continues its monthly salute to the Hal Roach Studios beginning at 8 pm with several episodes of TV’s Screen Director’s Playhouse…and that’s followed by a bonanza of comedy two-reelers featuring many of Roach’s stars—Harry Langdon, Charley Chase, the Taxi Boys (Billy Gilbert & Ben Blue), the Boy Friends and several shorts featuring many of the great comediennes who worked at the studio including Thelma Todd, ZaSu Pitts & Patsy Kelly.  A handful of these shorts have been shown on TCM in the past so I’ll be able to sneak in a catnap or two but there’s a lot of material here that has not been showcased (the Langdon shorts in particular) so it will require a strong constitution to stay awake…and I’m not as young as I used to be.  (Okay, the wisenheimer who just said “You’re not as young as anybody used to be”…well, I have to admit I did laugh out loud when I heard it.)

One comedian from the Hal Roach stable that will be conspicuously absent from TCM’s roster is a funny man who made some hilarious 2-reel comedies during the silent era but is largely unknown today: Max Davidson.  If you’ve ever seen the Our Gang comedy Moan & Groan, Inc. (1929) you might know him as the crazed old man who terrorizes the little rascals in the haunted house, and one of Image Entertainment’s Laurel & Hardy silent comedy sets features a Davidson outing entitled Call of the Cuckoo (1927), which is included because Stan & Ollie appear in the short (along with their nemesis James Finlayson and Roach star Charley Chase).  But for the most part, Davidson’s oeuvre has sort of been swallowed up in the mists of cinematic history…primarily because many of his comedies didn’t survive the ravages of time and neglect, but also because his shorts featured exaggerated Jewish stereotypes that probably wouldn’t pass muster in a more enlightened atmosphere today. 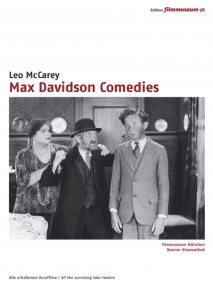 Which is sort of a shame, really—AMC showcased a pair of Davidson’s comedies back in the 1990s during one of their film preservation festivals (yes, kids—there really was a time when that channel actually showed films older than They Live), Pass the Gravy (1928) and Don’t Tell Everything (1927)—and I found both shorts to be falling-down-funny and entertaining, so if that makes me a bad person I plead guilty.  (I know a good many film buffs who consider Gravy to be one of the funniest silent comedies ever made, and I can’t say I disagree.)  Film historian Richard W. Bann, who co-wrote the Our Gang book with Leonard Maltin and who’ll forget more about the Hal Roach legacy than I’ll ever learn, announced on Facebook that Stefan Droessler’s Munich Filmmuseum is preparing a DVD collection of Davidson’s work to be issued in February of this year…and has also written an essay for the set, which you can peruse here at the laurel-and-hardy.com website.

Naturally, I will have to have a copy of this release so if you happen to be out grocery shopping in the near future and you spot a fat guy dancing for change…that’s probably me.  I would be remiss if I didn’t point out that if you’re up at 3 am to watch the Harry Langdon short The Shrimp (1930) on TCM you’ll be able to see Max in a supporting role as “Professor Schoenheimer.”

Bann’s news about the Davidson set prompted a lively Facebook discussion that proved fruitful to yours truly because I learned of another Filmmuseum release also due out in February entitled Female Comedy Teams—which will showcase many of the two-reelers featuring the wonderful female comediennes who created movie magic at Hal Roach Studios, including a good many of the Thelma Todd/ZaSu Pitts shorts and Todd/Patsy Kelly comedies as well.  A few of these were featured on TCM last year when the channel feted Thelma via Summer Under the Stars but it will be nice to get better prints of these 2-reelers (and sans the TCM logo), notably favorites like Asleep in the Feet (1933), The Bargain of the Century (1933), and Top Flat (1935).  In fact, Looser than Loose’s own Dave Stevenson (and I should also disclose, a Facebook chum) has written a nice description of this set at the website…and I loved what he had to say about Asleep, which is my favorite Todd-Pitts comedy:

If Asleep in the Feet is not the best short in the Pitts-Todd series, it is certainly the most charming.  It was directed by Gus Meins, who would later deliver eleven of the twenty-one Todd-Kelly efforts.  The action centers around the simple notion of raising twenty dollars to help a fellow tenant make the rent by working for an evening as ‘taxi dancers’ at a local dance hall.  Asleep in the Feet is brimming with heart, music and dance, yet succeeds comedically despite these distractions.  In fact, it incorporates them so well that it provides, arguably, the best accommodation ever crafted for the individual qualities of both ZaSu Pitts and Thelma Todd.  A wonderfully amusing scene results as an ultra-goofy ZaSu, spiffed up in cartoon-character lipstick and weirdly appointed eyelashes, struts around the dance floor, awkwardly regurgitating the anything-but-seductive words: ‘boop-oop-a-doop.’  Thelma barely has time to register her horrification as she dodges the persistent and unwanted attentions of Eddie Dunn the Department of the Navy’s local representative by ducking in and out of the ladies’ changing room.  Meins gives both women an opportunity to shine and, at the same time, illustrates, rather nicely, the warmth and friendship between the two that existed off camera.  ZaSu Pitts once said that she and Thelma needed only to make eye contact during a scene for the two to erupt in laughter, subsequently ruining take upon take.  That connection between the two women is best summed up in the parting shot as Thelma embraces a tearful ZaSu and offers a reassuring laugh. 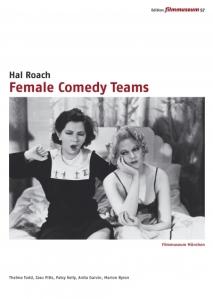 Well, what can I say—great minds and all that rot.  If you missed this short during the Thelma Todd tribute you can get a chance to see it again tomorrow on TCM at 5 pm (this is followed by Century, and then Backs to Nature [1933] and Top Flat).  Or you can wait for Female Comedy Teams to be released next month.  This collection also contains some of the shorts made by Anita Garvin and Marion Byron including the classic A Pair of Tights (1928), which I saw (though not in its complete form) in the Robert Youngson compilation feature When Comedy Was King (1960) during the channel’s Moguls and Movie Stars festival.  (It’s a pip.)

One thought on “Max-imum impact”